A Mortal Immortalized by his Legacy : Atal Bihari Vajpayee 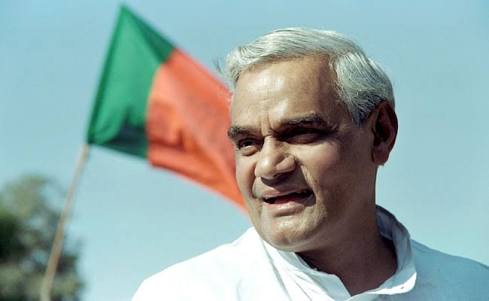 The road between BJP headquarters and Smriti Sthal in Delhi was buzzing since early morning yesterday. People thronged the streets right from end to end. Such strong were the numbers that later in the day, the crowd resembled a sea of heads. Shortly, a decorated military truck could be seen leading the procession. It was pulling a trailer with a coffin draped in Indian Flag kept on it. The prime minister of Indian Republic was walking just beside that coffin. A band of soldiers of the Indian Army was marching in front of the procession. Following the prime minister were the eminent leaders of the country.

A sea of Indians followed. Those waiting on the side of the street, started showering rose petals on the coffins as it passed by. The body inside the coffin belonged to Atal Bihari Vajpayee; former prime minister of Indian Republic, and a mortal human immortalised by his legacy.

Eulogies are meant more for dictators and demagogues. Obituaries are bland reporting of death. But none of them remembers the dead in the right and an all-encompassing light. So, this is neither a eulogy, nor an obituary. This is an attempt to understand a human who’s life was so entwined in the politics of India that the fact that he was human got somewhat lost.

Atal Bihari Vajpayee was born on 25th December 1924 in Gwalior to a couple who shared the same first name (Krishna). His initial education was completed in Gwalior, while he did his M.A in Political Science from D.A.V Kanpur. He was always a first-class student, with distinctions in multiple subjects. His intellect and curiosity instigated him into the mainstream socio-political arena.

He journeyed through the realms of Arya Samaj, and the RSS in his student days, to finally become one of the founding members of the Hindu Right-Wing party, Bhartiya Jan Sangh, in 1951. His oratory and organisational skills stepped him up on the political ladder, and he was given imminent positions in the cabinets. He was loved by his party and opposition alike. In politics, where opposition means enemies, this was no small feat. Despite that, politics has nothing to do with expression of love: people used to lovingly say, “Sabse Pyaare, Atal Bihari”. To know the reason behind this, his personality should be examined more than his achievements.

A politician’s ideological base marks his identity in the political scenario. But Vajpayee’s identity in Indian Politics transcends his centre-rightist place in the political spectrum. The relationships he had with other political leaders of his time, and the respect he had for Indian State and democracy are the major reasons behind that. For Vajpayee, democracy always came before his party and himself. He changed the meaning of an opposition leader, during his time of over three decades in Parliament.

His career with the UN was an illustrious one. He was a member of the Indian Delegation which went to UN multiple times. In fact, he was the first Indian leader to address the UN General Assembly in Hindi. During P.V Narasimha Rao’s tenure, he even led the Indian Delegation. All this while, he remained in the opposition. Vajpayee’s friendship with P.V Narasimha Rao is not hidden. However, this was an extraordinary feat, not only for an Indian politician, but for politicians all around the world.

In spite of being ideologically opposite of Nehru, he has continually praised his achievements. Someone as stern as Indira Gandhi, once held an umbrella for him when he was talking to someone, while she was the Prime Minister of India. His loyalty and respect were spread across party lines.

Vajpayee established the Bharatiya Janta Party from the ruins of Bhartiya Jan Sangh. This party represented a number of firsts. He served as the Prime Minister for three terms under the BJP’s banner. The first tenure lasted for thirteen days, the second lasted for thirteen months, and the last term made him the first non-congress PM to finish a full tenure.

His full fledged tenure as PM saw many path breaking developments in India. Sarva Shikhsha Abhiyan, Four to Eight lanes highways, Antyodaya Anna Yojna, Rapid liberal economic reforms and many other things. These developments showed the nation what a healthy economic growth rate seems like. It led to resurrection of hope in Indian youth which was highly insensitive towards political developments in the country. In fact, the hay days of UPA government had its base created during Atal Bihari’s rule.

However, Vajpayee’s political life has its own share of ambiguities and shortfalls. He came under rigorous criticism in the early years of the nineties, when the communal politics was on the rise, and issues like Babri and Shahbano were still fresh. His political stand brought his words into question. His speech before the day Babri Masjid was brought down by a crowd chanting ‘Jai Shri Ram’, is highly suspicious and indicates that he was a part of that conspiracy. He was never really successful in controlling his party elements, who repeatedly did something or the other to hamper the communal harmony. At one place, he has an image of a progressive and democratic leader, but then there are instances in his political life which give reasons to his critics to jeopardise those political claims.

His speech when his thirteen-day old government fell, is still one of the best speeches ever given in Parliament. It showed the determination of a seventy-one-year-old man, to resurrect and build his party. He was thrown out of power. He was mocked in the Lok Sabha. But he ended his speech by saying, “The game of power will go on. Governments will come and go. But India should live. India’s democracy should live.” This statement reflects why he was loved so much; why, in spite of belonging from the allegedly non-secular, Hindu Right-wing party, he was loved across party lines.

His words eerily strike at the humanness of the seemingly serious and competitive sphere of politics. It points out how much the image of being a “representative of the people” and the pressure of supporters tends to alienate a person from the image of a human. It is interesting how the image of politicians loses out on its human content with the years that they spend in politics.

Death is the only thing that reminds us of that. When the time comes for a Prime Minister to bid adieu to the material world, the question of a legacy grips the nation. Their death consolidates their contribution to nation’s history: which is now only a memory of a remarkable man whose name went down in history because of what he did. The nature of his deeds could have been anything ranging from extraordinary to questionable. But his death is what ignites his legacy. It leaves the masses to gather examples from his deeds to construct a narrative of a legacy which hopefully will find its way into the textbooks for children.

But then again Vajpayee chose to let democracy and India be more than his mere existence. May be that is what his legacy is: To serve the democracy of India selflessly; without any adherence to party lines, or to his own professed ideology. These traits of Vajpayee are the recipe of his legacy; a legacy which transcends ideologies. This legacy immortalise a mortal man, whose eloquent speeches will be reverberating in the halls of Lok Sabha whenever we talk about our democracy.