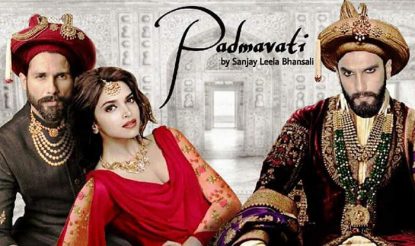 Ranveer doesn’t seem to mind sharing screen space with Shahid at all, and praises the Bhansali debutant in Padmavati.

The Saga of opulence, grandeur and magnanimity finds roots once again, at the turn of this calendar year, as Mega movie maker Sanjay Leela Bhansali walks down the Cineplex aisle, with Ranveer-Shahid-Deepika starrer Padmavati, set to roll out on this year end.

Keeping in tradition with his previous two Sagas, which showcased real pair Deepika and Ranveer on the Lead, this time, Bhansali offers screen sharing to the male lead cast. Shahid Kapoor, a Bhansali debutant, gets to co-star with Ranveer and Deepika in Padmavati.

Ranveer has been hounded by media ever since the star cast is official, and more so after the release of the track Ghoomar – the song from Padmavati.

Being the only male lead in past two SLB back-to-backs, Goliyon ki Rasleela, RamLeela, and Bajirao Mastani – the most sought after enquiry NOW made on Ranveer is about Shahid, the co-star.

In an interview with entertainment magazine Stardust, when Ranveer was asked about working with Shahid he said, “Shahid is a wonderful new addition to the team. And it is wonderful to have a solid actor to pay off. And we have a great time collaborating on the sets. Each shot requires everybody to pour in a lot more than they usually do. So even though each shot takes four hours to set up, in that four hours we discover which direction to take a scene in or we learn our lines or we prepare to give that shot.”Ranveer who will be essaying the role of Alauddin Khilji added, “So it is a very involved process. But yes I am very pleased to get to know Shahid. He has a very shaant zen-like vibe. And he is very easy to work with. Sanjay Sir, Shahid and I are always laughing and whatever it is that we are doing, however hard the work is we don’t forget to laugh.”