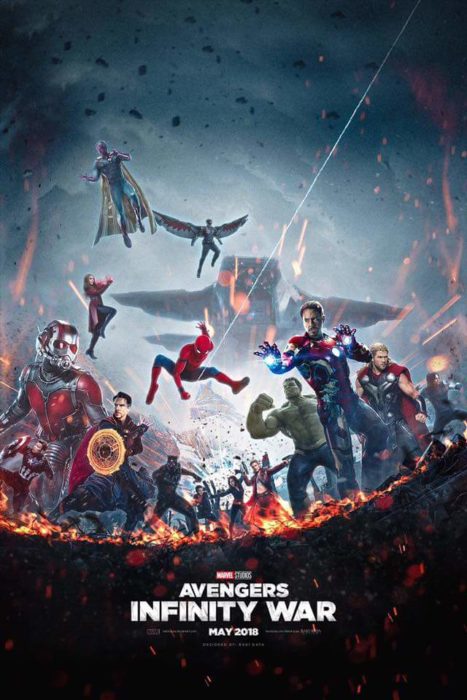 With the third Avengers movie releasing tomorrow, Marvel Cinematic Universe (MCU) is celebrating it’s 10th birthday as it has released its first movie in 2008 , The Iron Man , which was the first initiative towards the crossover of the movie ” The Avengers “. Later, many movies were released starring the superheroes – Captain America , the Ant man ,Thor ,The Guardians of the Galaxy, Spider man homecoming and finally the Avengers squad was concluded by the release of Black Panther this year. The upcoming movie is the first presentation of the Super Titan Thanos with his full unleashed powers. He has been sighted first in the The Avengers part 1 and then in the Guardians of the Galaxy and lastly in the Avengers:Age of Ultron . The movie is expected to count in mega blockbusters , as some serious hype is given to the antagonists as well as the heroes. The villains other than Thanos are his four minions – Corvus Glave , Midnight , Ebony Maw and Black Dwarf.

The movie is going to be a garland full of surprises , humour and splutters. It would be fascinating to see the characters who never met each other , will how , change the notion of the movie and the real delight would be in watching two Sherlocks sharing the screen , the two impeccable personalities who have knacked acting in a very flamboyant way , Benedict Cumberbatch and Robert Downey Jr . In the crossover , the mini crossover of The Avengers and The Guardians would be a glitz for the fans. In addition to the delight of seeing various characters who’ve never met each other rub off on one another, talk shop, and exchange banter, it’s also staggering to see how much Marvel’s universe has grown when it’s all brought together on a single canvas. The directors and the writers deserve praise for not making Infinity War feel rushed, as it has plenty of quiet meaningful moments for its characters, especially for Vision (Paul Bettany) and Scarlet Witch (Elizabeth Olsen), Quill and Gamora, and Stark. This isn’t true for most of the others, such as Cap and Black Panther (Chadwick Boseman), but that Infinity War can craft some genuine heart-breaking moments in such a massive get-together is a marvel.