Image Of India Internationally In The Name Of God (Baby Tossing) 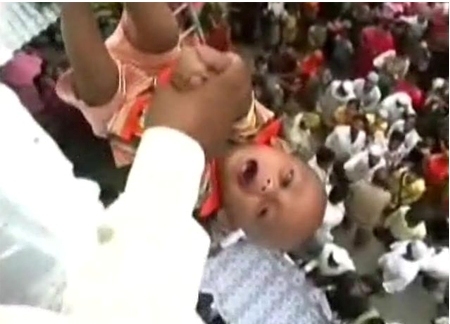 This ritual is known as Baby Tossing that takes place solely in India has been in practise since the past 500 -700* years approx. making it one of the oldest dangerous ritual.

About the Ritual: More than hundred babies each year in the month of December are tossed from the top of a temple roof to a group of men standing below with a cloth meant to catch the babies. It is practised among the Hindu and Muslim communities in South India,

It is believed that this ritual brings children good health luck for the community. People in majority are in the favour of this ritual.

A Youtube channel called ‘The Young Turks‘ is one of largest Online News show in the World. Hosted by Cenk Uygur & Ana Kasparian has done a show on this ritual of Baby Tossing .https://www.youtube.com/watch?v=BjiQBcOCk7w

What’s shameful for us is we as Indians still are not familiar with the word logic and sense. The 11 deaths in Delhi is a very recent example standing before us.