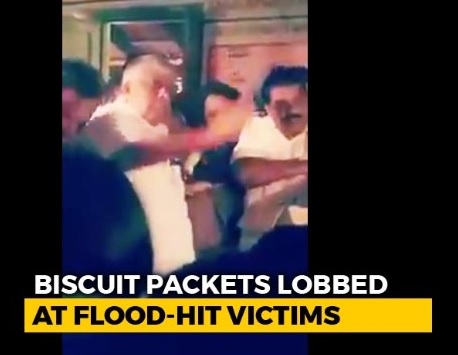 Karnataka minister HD Revanna is seen throwing biscuit packets at flood victims in a video that has become viral. The blunder was committed in a relief camp in the district Hassan.

HD Revenna is the state Public Words Department Minister in Karnataka. He is also the brother of the Chief Minister HD Kumaraswamy.

In the video, Revenna was seen taking biscuit packets from officials and tossing them at flood-hit men, women and children sitting on the floor in front of him.

The Chief Minister came to his brother’s rescue and insisted that Mr Revanna’s act was “not out of arrogance” but occurred due to lack of space.

“I have noticed that the issue has come in TV, don’t take him otherwise. I have crosschecked… while distributing the biscuits, there were large number of people there and there was no place for movement,” he told reporters.