Save Me From My Father – Pleads House Arrested, Alleged Love-Jihad Victim Hadiya 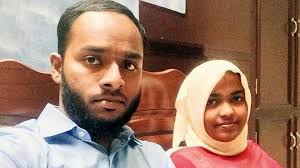 Religion, Dad, Marriage, Judiciary, Activist, Jihadist – the so-called Love-Jihad victim Hadiya’s life sans Love. . . The alleged story of Love-Jihad deepens as Hadiya screams for help via an activist, who’s releasing her plea in tranches, through video footage captured by him. Hadiya is pleading to be rescued away from her father, who’s kept her in strict vigil and as she claims, is making her life miserable.

The name Hadiya means “guide to righteousness”. And here struggles the 24 year old girl, cornered from courts and house arrest, on the claims of being wedded falsely (nullified by court) for conversion and Love-Jihad.

Hadiya or Akhila Ashokan, the Hindu woman confined to her parents’ house after her marriage to a Muslim man was annulled by the Kerala High Court, is seen in a new video pleading with an activist to help her get out.

“You need to get me out. I will be killed anytime, tomorrow or the day after, I am sure,” Hadiya said in the video, The media source reported on Thursday. “I know my father is getting angry. When I walk, he is hitting and kicking me. If my head or any other part of my body hits somewhere and I die…” The video was shot on August 17 by activist Rahul Easwar.

Hours after the video was released, Hadiya’s husband Shafin Jahan asked Kerala Chief Minister Pinarayi Vijayan to intervene. He wrote to Vijayan, saying Hadiya’s rights were being violated, a media house said. Hadiya’s father, however, dismissed her concerns. “Nothing has happened to her so far…” Ashokan KM told while speaking to another news agency.

The activist, Easwar said, he has only released “a part” of the video, but would hand over the rest of the footage to the court. The next hearing in the Supreme Court is on October 30.

The Kerala High Court had annulled Hadiya’s marriage to Jahan in May, acting on a petition filed by her father in 2016. Hadiya’s father had told the court that he felt Muslim organisations planned to take her abroad and make her join the Islamic State group. He also claimed that Jahan was involved in terror activities. The court had ordered Hadiya to be placed under her parents’ custody and she has been in her father’s house ever since.