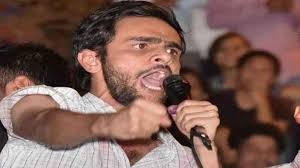 Umar Khalid, more soberly designated as a student of Jawaharlal Nehru University, was targetted by some unidentified men in the constitution club near the Parliament in Delhi. Umar Khalid went to the venue to attend an event titled “Khauf se Azaadi”, organised by an organisation named ‘United Against Hate’.

Joint Commisioner of Delhi, Ajay Chaudhary confirmed that Khalid was attacked from behind, while he was having tea outside on a tea stall. Khalid fell down as a result of the shots, but he escaped unharmed. The joint commisioner later informed that an enquiry has been setup. Khalid called this attack on him as an attack on dissenting voice within the country. He said that anyone who is trying to raise the voice against the government, is being threatened. He also attributed this attack to the atmosphere of hate which is being spread by the Modi Government. JNU’s Student Union called this as an attack of “culmination of hate filled propoganda against the Modi Government”.

Umar Khalid earlier came into limelight during the Afzal Guru controversy which popped up in JNU a couple of years back. He was booked for sedition along with Kanhaiya Kumar, and Anirban Bhattacharya.