With emoions subverting rationality, and demagoguery being celebrated; we have entered the hey days of the post-truth era. It's inception is known and has been analysed a lot; but it's continuation brings ominous signs for the nation today.
Maverick TimesNews with a DIFFERENCE
Maverick TimesNews with a Difference
Search
Home Political news The Predicaments of a ‘Post-truth’ era
Facebook
WhatsApp
Twitter
Pinterest
Linkedin 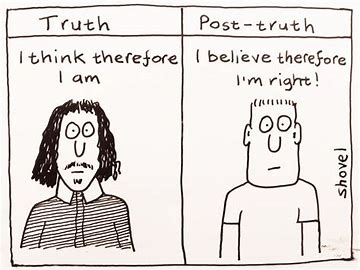 The oxford dictionary declared the word ‘post-truth’ as the ‘Word of Year 2016’, after an increase of about 2000% was seen in the usage of the term. It’s use became pretty common during the American elections in which Trump emerged as the victor. The term ‘post-truth’ is used more in the political context than anything. In ‘Post-truth’ politics, debates are framed more by emotions, rather than actual policy oriented discussions and factual substance. The point which is being advocated will be repeated again and again in spite of factual rebuttals. Expert and informed opinions are secondary to emotions.
This kind of situation is mirrored in India and most of the world today. With the completion of four years of BJP government, it is more and more evident how most of the political decisions today are more based on emotional impulse than strategic planning. See the case of Demonetisation. The step was taken in haste, and Modi riding on the emotional and sensitive support of the a major population of the country, kept advocating the decision which was flawed in it’s reason and implementation. It’s intention was clear, but the implications weren’t considered while taking the decision. It’s a classic example of the era of post-truth, where a populist leader takes a big misleading step, and is backed by emotions of the people rather than their rationality.
In fact, the side affects of the post-truth era are not limited to policy decision. Nationalism and Patriotism are being used today as an excuse to criminalise dissent. This leads to the spread of jingoistic mentality in the masses, which blurs the distinction between activism and radicalism in the people’s mind. Voices against the government are being seen as voices against the Indian state. Dissent is seen as treason. These phenomena confirm how politics riding on emotions (of the majority or any particular ideology) flirts with psychology of the nation and its people. This situation is more ominous than it seems. In complexly diverse societies like India, it materialises the already existing differences between the people. It creates fault lines between groups, where tremors of intolerance against each others existence rock the very foundation of the Indian state. The overwhelming voluptuousness of intolerance and hate in people, not only in India but all around the world, is being legitimised by the post-truth politics in the world today.
Recent arrests of five social activists in India is a recent example of cruelty which post-truth politics brings along with it. However, the saddest part is that the end of such politics is nowhere in sight. It seems like we have just entered the hey days of such politics, and we have a lot more to see and be disappointed with.
With emoions subverting rationality, and demagoguery being celebrated; we have entered the hey days of the post-truth era. It’s inception is known and has been analysed a lot; but it’s continuation brings ominous signs for the nation today.

Smriti Hits Back At Rahul Gandhi Over Farmer Protest

BJP proposal of alterations in the farm laws rejected by the farmers, Opposition to meet President Kovind