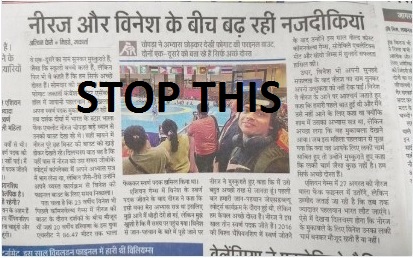 When we saw that time for paid news has arrived, we thought, this is the lowest. Then came fake news which further lowered the bar. Now a new low of paparazzi struck the media.

There are two international level athletes. Both are competing in an international tournament bring accolades for the Nation. Years of hard work is paying off for them. After winning the medal, they read the newspaper and find the news of their link-up. Can you imagine the frustration and embarrassment of those athletes?

Instead of analysing and praising their efforts, our media is printing news of romantic link-up. And that too, a newspaper with nation-wide reach. All based on a paparazzi story done by a website –  Midday.

After destroying the privacy of Bollywood stars and cricketers, their next target is Sports. On one side, our athletes are working and performing at international level and on the other-side, these paparazzi reporters, sitting in AC and on desk, embarrassing them. Even interview questions have also transformed into being Lucky Charm. The base of the link-up – our typical Indian assumption to find the culprit – he/she was laughing/blushing.

The athletes responded well and tweeted in respond to the link-up in order to clear the smoke which no fire caused.

It’s a shame that the media has stooped so low. It doesn’t matter if they are engaged or not. They are well-grown adults and know what they are doing. Instead of focusing on their performance and inspiring the readers, they are posting fake link-ups. This should stop.