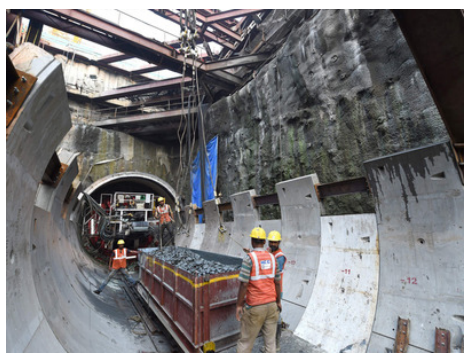 Mumbai is in a mood to snatch lifeline status from its beloved local trains. The city transport structure needs a revamp and Mumbai Metro Rail Corporation (MMRC) is just doing the same.

So far, MMRC has dug around 220 metres of the 33.5 km-long underground corridor. This corridor will connect Colaba in South Mumbai to SEEPZ in suburban Andheri. The corridor, will definitely be the “game-changer” for the city’s transportation system and will also reduce pollution. It is likely to pass over around 2,000 buildings. Since a project of such magnitude is being constructed underground, there are chances of vibrations that would cause buildings to collapse. MMRC has devised a comprehensive plan for digging underneath while allying these fears.

“Nearly 1,500 project-affected families have been shifted and a manpower of 7,600, including skilled and unskilled, is on the job,” the state-owned agency implementing the project, said recently.
The Metro-3 corridor will skim through Colaba up to SEEPZ (Santacruz Electronics Export Processing Zone, a special economic zone). There will be 27 stations on the route, out of which 26 will be underground.

The underground metro rail will impact the city’s groundwater system. An Australia-based water resources management specialist has warned but cannot predict the magnitude of impact. It’s obvious the project will disturb the natural flow of underground water.

“Just how significant the impact be, and what will be the impact post construction can only be determined with detailed modelling,” said the expert Jehangir F. Punthakey.

Bhikha Behram well, near Cross Maidan, is the oldest well in the city. The underground line will pass near this well and several other wells situated in two fire temples situated at the Princess Street junction in south Mumbai.

Mumbai Metro Rail Corporation (MMRC) officials had earlier assured community members that the tunneling work will not affect the wells or ground water. They said the tunnel will be 70 metres away from the Bhikha Behram well.

Japan’s International Co-operation Agency (JICA) will be providing a loan assistance of Rs. 13,235 crore, which will account for 57.2 per cent of the total cost. The State and Union governments will manage the remaining funds.

MMRC is the joint venture between the Centre and the Maharashtra government. It has set 2021 as the deadline to get the entire stretch operational.

Chief Minister Devendra Fadnavis is expecting that by the end of 2022, over 90 lakh people would travel in the Metro trains. The system is much hassle-free and would definitely save a lot of time in commuting. Besides, rains might not become the hurdle in this system. Let’s see if MMRC adhere to the set deadline or not.